Red Raspberry
Made from 100% raspberries. Perfect complement to cheesecake, chocolate desserts, or serve as a spritzer with crushed ice. Best enjoyed with a favorite dessert or cheese. Serve chilled. (375 or 750 ml bottle).

Ice House Misty Bubbly
Is a semi-dry sparkling wine with citrus aroma and goes well with fish & chips, egg dishes, and with appetizers. Named for icehouses on south side of the lake during the 1890s-1930s. (750 ml bottle). 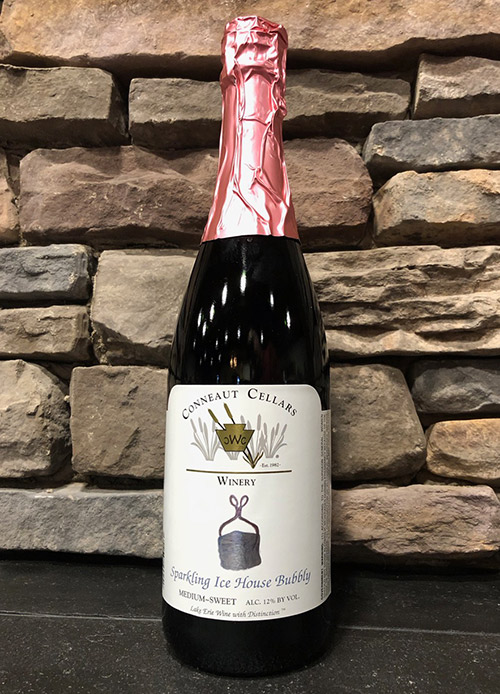 Ice House Crackling Pink Bubbly
This sparkling wine is less effervescent than our white bubbly, semi-sweet, and has a grapy aroma. Crackling wine is known as frizzante (Italy), petillant (France), and spritzing (Germany). Named for icehouses on south side of the lake during the 1890s-1930s. (750 ml bottle).

Chat de Vie (Red Vermouth)
Inspired by Italian Torino-Piedmont aperitifs with American twist with extra bitterness, we use our wine and brandy. We macerate the vermouth using a mix of over 20 ingredients (using organic whenever possible), which includes orange peels, vanilla, cinnamon, traditional wormwood, and other botanicals. The bitter (amaro) initial taste disappears with aftertaste of black cherry, orange rinds, vanilla, cinnamon, and anise. This vermouth is the first commercially produced vermouth in PA and is named Chat de Vie (French for Cat of Life) for the Erie Indians of the 1600s. Serve in Manhattans or over the rocks with orange slice as after dinner drink.